Kaspersky Lab has announced it has rebranded, now bearing the company name ‘Kaspersky’ and with the mission of ‘building a safer world’.

The cybersecurity company said the new branding reflects the evolution of the business focus from ‘cybersecurity’ towards the wider concept of ‘cyber-immunity’, in a world where technology connects people across platforms and borders like never before.

Commenting on the new rebranding, Eugene Kaspersky, CEO of the company, said: “Since we founded our company more than 22 years ago we’ve seen both the cyberthreat landscape and our industry evolve and change beyond recognition, while witnessing the growing role of technology in our lives both at work and at home.

“Today the world has new needs and our rebranding reflects our vision to meet those needs – not just for today, but well into the future. Building upon our successful track record in protecting the world from cyberthreats, we’ll also help build a safer world that’s immune to cyberthreats. A world where everyone is able to freely enjoy the many benefits that technology has to offer.”

As part of the rebrand, Kaspersky has also updated its visual identity to reflect its core values and the essence of what it stands for as an organisation.

The new logo is created from geometric and mathematically exact letter forms, representing the top-class software engineering expertise that the company originated from and to which we remain committed.

Andrew Winton, Vice President, Marketing at Kaspersky, said: “The basis for our existing logo was developed in 1997 and many things have changed since then. Previously, we used letters from the Greek alphabet that are just not relevant anymore due to the changes in the breadth and depth of our communications – we need to look to the future and embrace the digital world.

“It seemed logical to remove the Lab from our name when we were developing the new visual identity – as we wanted to simplify our branding in a way that helps to deliver our newly inspired philosophy and mission, while still highlighting our company’s wide range of technologies.” 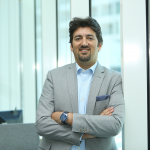